Rain stops play? How biodynamic and organic vineyards fared in 2011 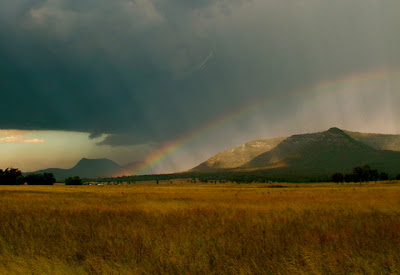 It started last November. Back when the heavens opened on vineyards across south-eastern Australia, bringing every grape-grower’s worst nightmare: the triple fungal whammy of downy mildew, then powdery mildew and, finally, botrytis.
When the downy first appeared - as distinctive yellow ‘oil spots’ on the vine leaves - I heard a winemaker utter a phrase that would be repeated across the industry time and time again: “This is one year you really wouldn’t want to be organic or biodynamic.” By the end of the wettest, most disease-ridden vintage since 1974, this view seemed to have become accepted wisdom: that unless you used systemic chemical fungicides during the growing season, 2011 was a write-off.
But is that true? After speaking to dozens of Australia’s organic and biodynamic winegrowers it is clear that, on the whole, they did not fare any worse than their chemically-assisted counterparts. Indeed, in some instances, being organic or biodynamic has been beneficial.
Sure, there are stories of total or near-total crop loss in organic and biodynamic vineyards. The Cooper family at the recently-certified Cobaw Ridge vineyard in the Macedon Ranges, for example, did not pick one grape - partly because the incessant rain made it so hard to get into the vineyard to work and partly because they refused to resort to systemic chemicals: “If we had it would have meant loss of our organic status for three years,” says Alan Cooper. “And we have invested too much emotionally to go back to the start.”
The Baldasso family at Protero in the Adelaide Hills also eventually succumbed to mildew rather than lose their biodynamic certification: they managed to pick just a couple of tones of pinot noir and cabernet, but this may not be released under the Protero label. “Vintage was a disaster for us,” admits Rosemary Baldasso.
It was a similar story for Julian Castagna in Beechworth: “We discarded more than 60 per cent of our grapes on the sorting table - and what wine we have made is not typical and therefore unlikely to be released as Castagna.”
But “disasters” like this aren’t limited to organic or biodynamic growers by any means: plenty of “conventional” vineyards that were sprayed with synthetic chemicals also lost some, most, or all of their crop. It was, remember, the vintage from hell - as Julian Castagna points out, “We had more rain between the end of November and the middle of March than we've had in the last 10 years.”
And for every tale of woe, there is at least one tale of survival. Larry Jacobs from Hahndorf Hill reports that a spray regime consisting solely of organic-approved doses of sulphur and copper and applications of biodynamic preparations resulted in minimal crop losses for most varieties - particularly the Austrian grapes gruner veltliner and blaufrankisch - and that, thanks to rigorous fruit selection, “what ended up in the tanks is really excellent.”
Some growers are even more positive. “We came through vintage 2011 with some of the best fruit we have seen for years,” says Sue Carpenter of the certified-biodynamic Lark Hill vineyard in Canberra. “Acid levels were high, fruit flavours were pristine and delicate, sugar levels were moderate.”
Biodynamic Barossa winegrower Troy Kalleske is more cautious in his assessment. “Overall we fared pretty well this vintage,” he says. “Some wines are good, some great and a couple so-so. There were some people in the region who thought the Kalleskes would be screwed this year and it’s quite the contrary. We just did our usual biodynamic spraying regime, but just a couple more times than normal. And we were able to pick all of our blocks - unlike many vineyards in the Barossa, who sprayed up to 15 times with chemicals, and still ended up dropping grapes on the ground or leaving them hanging.
“People think that organics is only good in an easy growing season but I think the opposite: that a tough, wet, disease-prone season is really where organics comes into play. I do genuinely believe that because we have been farming this way for so long now, the health of the soil has given the vines a natural resilience.”
Angove winemaker Tony Ingle is also impressed with how the company’s certified organic block at Nanya vineyard in the Riverland and the biodynamically-farmed shiraz in McLaren Vale held up this year.
“There were a few revelations,” he says. “Firstly, the vine leaves appeared to be sturdier and more resistant to disease pressure in the organic blocks. Secondly, we noticed with the shiraz that the skins seemed thicker than conventional fruit. Not just on our own vineyard: we took fruit from other growers, and saw the same thing, where organic fruit came in fine and other fruit was rejected. And we also discovered that some organic certified fungicides worked better than the synthetic chemical products - and we ended up using them instead on the conventional vineyards towards the end of the season.”
According to Yalumba winemaker Heather Fraser, the various South Australian growers who supply fruit for the company’s range of organic wines fared no worse - and in some cases better than - “conventional” growers.
“On the whole, the organic and biodynamic vineyards took longer (if at all) to show signs of disease than neighbouring non-organic vineyards,” says Heather. “The biodynamic chardonnay vineyard, for example, was almost the only Riverland chardonnay block to show no sign of powdery mildew. And in the Pewsey Vale Contours vineyard in Eden Valley, which is in the first year of conversion to organic and biodynamic management, we saw no disease other than a small percentage of botrytis, and there was no significant difference between this and the conventionally managed blocks.”
So, yes, 2011 was as challenging for organic and biodynamic growers in the south-east as it was for everyone else. But a total write-off? Not at all.
(This article was first published in Gourmet Traveller WINE magazine in August 2011)
Posted by Max Allen