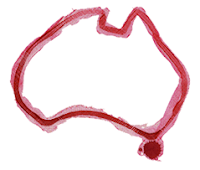 In my column in The Weekend Australian Magazine in late 2008 I started a campaign urging Australians to drink more Australian wine to counter the surge in imported wines. I called my campaign DrinkUp!; I talked about printing t-shirts with the slogans ‘Drink Australian Made’ and ‘Think Global, Drink Local’; I resolved to lay off French champagne and Marlborough sav blanc in the new year, and only drink Aussie.
I never got those t-shirts printed, of course, because I was only half serious. Winemaker Stephen Pannell, by contrast, is completely serious.
Pannell recently launched a very real web site called All For One Wine inviting fellow winemakers, retailers, sommeliers and ordinary, everyday winelovers to make a pledge to only drink Australian from January 1 until Australia Day.
(Disclosure: I helped scribble some words for the launch of the site and was one of the first to pledge - but this probably won’t come as a surprise to you.)
Pannell was motivated by the fact that, while Australian exports and domestic sales are sluggish, imports grew by almost 19 per cent in the last quarter. He was also frustrated by how besotted many Australian sommeliers and winemakers and wine show judges have become with exotic Europeans, at the expense of our own best bottles. The cultural cringe appears to be thriving in certain sectors of the wine community - hence All For One.
You would think, wouldn’t you, that a push to get Aussies to drink Aussie for a few days would be greeted with open arms, hearts and mouths. And on the whole the reaction has been positive: more than 1,000 people have already pledged. But All For One Wine has also incited a virulent backlash in some quarters.
The Kiwis, for example aren’t very happy at all (predictably, really), and have slammed the initiative as a ‘myopic’ boycott. More surprising has been the reaction from some local winemakers and bloggers, calling All For One Wine naive protectionism and worse. Indeed, for a while there after the web site was launched, a Twitstorm of arguments and accusations raged across the interwebs, with some people (including your correspondent) getting quite hot under the collar about the whole thing.
Which I suppose is the best possible outcome: it’s about time someone rattled the cage and stirred up impassioned debate about the future of Australian wine.
To make the pledge, click here.
Posted by Max Allen

Labels: All For One Wine